Wilco heard while you're out and about 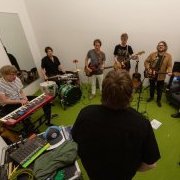 It was a birthday surprise for the co-host Matt Spiegel (for those who don't know he is in a great cover band called Tributosaurus).

Wait til you get a couple episodes further…

At a Strand of Oaks show last weekend, Pat Finnerty (who now plays guitar for Strand of Oaks and also does the “Why This Song Stinks” podcast) opened the show for SoA by playing random covers that the